As we commemorate May 8, 1945, V-E Day (Victory in Europe Day), the formal acceptance by the Allies of World War II of Nazi Germany’s unconditional surrender of its armed forces and the end of World War II in Europe, we are also reminded that the U.S. military has been a vital resource for fighting disease in peacetime and wartime, including our current worldwide coronavirus pandemic.  Military leaders have added the Biosphere (emerging pathogens and infectious diseases) as the “seventh domain” of warfighting to the traditional sea, air, land, space, cyberspace, and logistical aspects of fighting a war.

Disease is nothing new in war – it is often called the “third army” since it historically kills more troops and civilians than the actual war.  Pneumonia, typhoid fever, diarrhea/ dysentery, and malaria caused two-thirds of the estimated 660,000 deaths of soldiers in the Civil War, which lead to a 2-year extension of the war.  Yellow Fever almost completely prevented construction of the Panama Canal, killing 5,600 workers, until Army physician, Dr. Walter Reed, confirmed Cuban Dr. Carlos Findlay's theory and work 20 years earlier that Yellow Fever was transmitted by a mosquito rather than direct contact.  World War I saw the Spanish flu, meningitis, typhoid fever, tuberculosis, measles, mumps, chickenpox, and bacterial pneumonia.  Overcrowding and lack of social distancing on war ships was particularly dangerous for spread of disease in World War I.  This began to change in World War II, when antibiotics and vaccines became available, but tuberculosis, rheumatic fever, hepatitis, and tropical diseases such as malaria and dengue fever were still common.  The Vietnam War only saw 78 deaths from malaria because of the effectiveness of weekly chloroquine-primaquine administration.

The 1918 Spanish flu pandemic, caused by the influenza H1N1 influenza virus, lasted from spring 1918 through summer of 1918 and infected approximately one third of the world’s population or 500 million people with death rate estimates anywhere from 17 million to as high as 100 million people including about 675,000 deaths in the U.S.  Our family lost my great grandfather, Giovanni Paventi, who arrived from Italy through Ellis Island at age 18 only to succumb to the Spanish flu 14 years later in 1918 at age 32.  In comparison, as of May 10, 2020, COVID-19 has infected more than 4 million people and more than 281,000 deaths including 1.3 million infected and 79,000 deaths in the U.S.

Currently, there are more than 45,000 Air and Army National Guard and thousands more Navy, Army, Army, and Marine Corps healthcare and other support professionals deployed in our national COVID-19 response.  They work on hospital ships Mercy and Comfort, man field hospitals, and enter communities to assist civilian hospitals and nursing homes.  The U.S. military has always been at the forefront of fighting disease on the domestic and humanitarian international fronts and always will be. 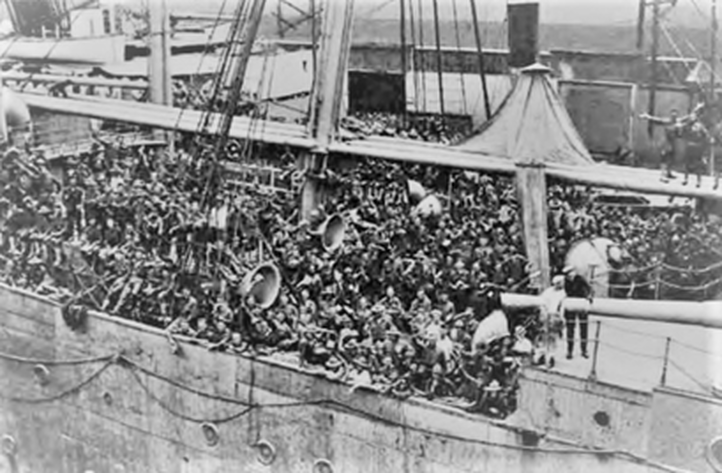